BOOK: A history of endometriosis by Ronald Batt MD 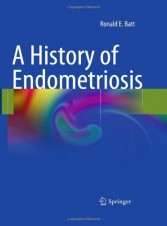 As a social science, history often engenders discomfort in the scientific community, including health professionals. Social sciences, you see, are not sufficiently ‘scientific’.

Thankfully, A History of Endometriosis beautifully illustrates the folly of this assumption, by revealing the delightfully unexpected aspects of history: who would have known that our 21st Century understanding of endometriosis was shaped by the contributions of Johann Wolfgang von Goethe or Immanuel Kant? The cited 19th century descriptions of the inflammatory nature of what was come to be known as endometriosis also reinforce that one ignores history at one’s peril!

The foundations of this book lay in the requirement of Dr Ronald Batt to fulfil his Doctorate of Philosophy in History and this approach is clearly evident in the meticulous research into the subject.

A History of Endometriosis is divided into twelve chapters, beginning with the fundamental scientific reorientation of the late eighteenth century that culminated in the emergence of Carl Freiherr von Rockitansky as the first full time anatomical pathologist of the modern era.

The author then takes us on an extended journey to introduce Friedrich von Recklinghausen, Thomas Cullen, and John Sampson. Each chapter entertains with remarkable insight into not only their work, but also the environment that shaped each revelation.

Amongst the gems in this collection is the revelation of DeWitt Casler’s treatise to the American Gynecological Society in 1918 that inspired Sampson’s theory. Remaining entirely true to the scientific writing genre, Dr Batt not only describes these personae, but also deliciously hints at the conflicts and machinations of these great leaders. Extensive footnotes reference the text: initially distracting, but much like the 3D effects in Harry Potter: The Deathly Hallows: ultimately rewarding!

Appropriately, this work is entitled A History of Endometriosis. There is no reference to the antiquities, the work of the early anatomists of the middle ages, or even an analysis of women in the history of endometriosis. However, this should not to be seen as an oversight. The author’s epilogue resounds in his hope to stimulate critical debate, refinement and further contribution. Inspired by this book, I trust that the definitive THE History of Endometriosis will not be too far away!

Undoubtedly, the narrow focus of this book will keep it off the Amazon Bestseller List, but this monograph has earned its place on the bookshelf of every Department of Reproductive Medicine and University.

Royalties from A History of Endometriosis will go to the Rodolphe Maheux Travel Fund enabling young researchers to attend world congresses on endometriosis.